Guam casinos are non-existent as the laws within the US island territory prohibit practically all forms of gambling. There have been loads of attempts to legalize casino gambling by various parties within government, but none have been successful. There was previously a time where the tiny island allowed the public to play games of chance for real money with most proceeds going to state funding. However, a law passed in 2017 outrightly banned all forms of casino games regardless of the purpose.

If you would like to learn more about gambling in Guam (or the lack there of), make sure to read on down below. In our guide to casinos in Guam, we have a good look at whether or not there is any way for citizens on the island nation to gamble and the gambling laws that the nation has decided to adopt. We also list a number of online casinos to have a look at if you’re thinking of adopting the modern form of worldwide gambling. So, read on and find out all you need to know about gambling in Guam.

The gambling laws in Guam explicitly prohibit all forms of gambling within the state. Finding a place to play any sort of casino game outside of a charitable bingo game in a brick-and-mortar establishment is very hard as it is most likely illegal.

Interesting thing to note is the fact that Guam’s laws do not really reference interactive gaming – that is to say online gambling. While it is a good rule of thumb to work with the idea that all things gambling is illegal in the state, you can’t really be prosecuted for gambling online as the state’s laws don’t explicitly state that it is illegal.

Types of Gambling in Guam

Currently, the only form of gambling that is legal in Guam is pari-mutuel betting. All other forms of gambling are illegal. This includes sports betting, casino games and poker rooms. People who own slot machines in Guam that are not operational can even be prosecuted. Bingo and lottery games exist to some extent in the state, with non-profit organizations being able to use these games as a way to raise funds for charitable causes.

It is important to note that state officials have tried to legalize gaming in the island nation several times. Each time voters have needed to vote on legalizing gambling, voters have turned it down with the most recent vote taking place in 2004.

Up until 2017, gambling games were allowed at national siestas honoring Catholic patron saints with the Liberation Day Carnival being a prime example. However, Senator Telena Cruz Nelson passed a bill, which banned these events from taking place. The end-result of this has really just been increased discussion on the future of gambling within Guam, and many hope that it will lead to the legalization of the activity. 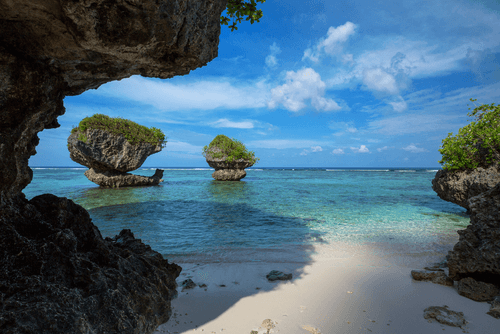 Evolution of Gambling in Guam

Gambling has never really been legal in Guam. However, the state always made an exception for the Liberation Day carnival – a two-week festival which commemorates the liberation of the island from Japanese occupation during World War II – where games of chance featured as a primary attraction.

However, in 2006, Governor Felix Camacho put a ban on that too but the games still continued to feature. In 2017, Senator Nelson tried to improve on Camacho’s attempts by outrightly banning these types of carnival events but people still went to these events. It seems though that this decision has now been reversed and that games of chance and the carnival are once again legal for the duration of the festival. Hopefully, the little island state will legalize gambling properly soon.

What is the gambling age in Guam?

Well, for pari-mutuel betting, which is only form of legal gambling in the state, the legal age is 18. However, good luck to those trying to find a horse racing track to bet at in the little island territory.

What forms of gambling are legal in Guam?

Pretty much all forms of gambling are illegal in Guam with the exception of pari-mutuel betting.

Are there any Indian casinos in Guam?

As there are no recognized Indian tribes in Guam, there are no reserves within the state. This means that there is no sovereign land to place the casinos on.

What casino games are available in Guam?

Well, there aren’t many due to the gambling ban but if you count games like bingo and keno as casino games, non-profit organizations often use them as a way to raise funds at charity events.

Is sports betting legal in Guam?

Is online gambling illegal in Guam?

Well, the territory’s laws don’t explicitly reference interactive gambling. This gives players at US casino sites a little bit of leeway with regards to gambling online.

Check out our other state pages: