When you hear Elf the first thing that comes to your mind is probably epic adventures in a mythical fantasy setting. Elf Wars is an epic adventure Christmas-themed slot developed by RealTime Gaming. Although the slot is about Elves, it does not have the sombre feel of most epic tales involving an Elf theme. The Elf Wars slot has a distinct cartoon vibe. The elves featured all seem to have mischievous expressions on their faces. Let’s explore what Santa’s Elves could possibly be warring about and see what spoils of war we can gather on the reels.

The story behind the slot is that a war has erupted between the good and the bad elves. The good elves are fighting to get all presents delivered by Christmas. In this five-reel three row grid with 50 paylines, there are multiple opportunities to win loads of real money. All symbols in this slot game are Christmas-related and placed against a military background. You can’t help but be drawn to the contrast. 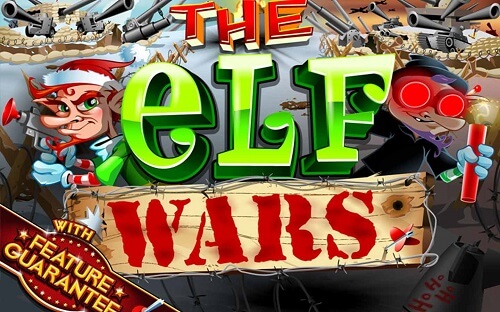 Besides the Christmas related symbols, there are playing card symbols which come in festive wrapping. For each five playing card symbols, players can earn up to 150 Points. The frog food symbol earns players 250 Points for every five on the reels. Five or more of Any of the toys earn 750 coins, while the snowman earns 1000 coins for five. The North Pole sign is the highest earner at 1500 coins for five.

In addition to these great game rewards, RTG included two scatters and two wilds. The good and the bad elves are the scatter symbols while Santa and Rudolph the Reindeer are the wild symbols. Landing five wilds earns players 2000 coins. Landing four scatters earns players an 8x multiplier boost for any wins earned at the time. While five scatters significantly boost your wins with a massive 100x multiplier boost. If this isn’t a slot to play for real money wins then, we don’t know what is. An additional two scatters will trigger one free respin. Getting a combination of three good or bad elves triggers two bonus game features which players have to choose and play. The bonus games featured in the Elf Wars slot are Santa Strikes Back and Jackpot Spins.

With an RTP of up to 97% along with all the bonus features there is no reason not play this RTG slot. Play Elf Wars at any of the leading casino sites that we have shortlisted and score yourself some big real money wins.