Realtime Gaming managed to keep the spirit of the Roman Empire alive in the Caesar’s Empire slot. American players can expect to be fully immersed in ancient Roman ambiance. All the symbols are thematic and the reels are set against a majestic colosseum. Caesar’s Empire is one of RTG’s older games which is part of the reasons why it’s still so popular. The nostalgic feel of the old-style animation is part of the charm of the slot. Below is a list of great US casino sites where US players can play the Caesar’s Empire slot, other Realtime Gaming slots and slots from other top casino game developers.

Caesar’s empire is a simple five by three grids with 20 bets with small minimum bet of $0.01! this means even players with smaller bankrolls can still have equal opportunities to win big real money when playing Caesar’s Empire. The symbols in this RTG slot include Caesar himself, his Cleopatra, Trojan swords, Roman soldier’s helmet the standard card suits 9; 10; J; Q; K and A amongst other symbols. The image of Caesar represents the wild and it can substitute for any other symbol except the scatter. Any wins that earned with the Wild in play are tripled. There are special conditions to be met for the wild to have any effect. It must appear on the first up to fourth reels. The scatter symbol is the colosseum which multiplies the players bet a staggering 100 times when five appear on the reels. 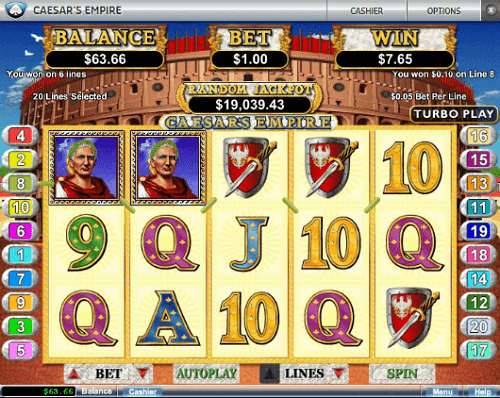 Multipliers, wilds, scatters free spins, and progressive jackpots have made Caesar’s Empire rank high on our slots to play list. The only thing you may fault is the dated cartoon animation style, however the real money wins will make up for that nearly minute hiccup.