The wave of sports gambling that has hit the United States took root in Indiana almost 5 months ago. we check back with the state to see how well the sports gambling operators are doing in that state. Judging from the figures recently released feeling the period spanning from the 1st of September to the 31st of December 2019 almost $ 450 million was made in wagers according to local papers in Indiana. Unlike other States; Indiana allows sports betting on both college sports and other major leagues and this has been instrumental in the revenue that was collected from sports betting that state. Follow along as we expand on how well the state did.

in its shortest time in existence Indiana sports betting has made more than what the super bowl made in advertising earlier this year. this is a huge accomplishment given that the super bowl is the most anticipated sports event in the United States. what may have contributed to the growth and exponential growth of the Indiana sports betting industry was the fact that it kicked off right before most sportswear starting their seasons. Indiana sports gambling was launched in September and the NHL kicks off its season in October and that alone is enough to propel a huge spike in sports betting. In its introductory month in September just over 35 million was made in wagers. 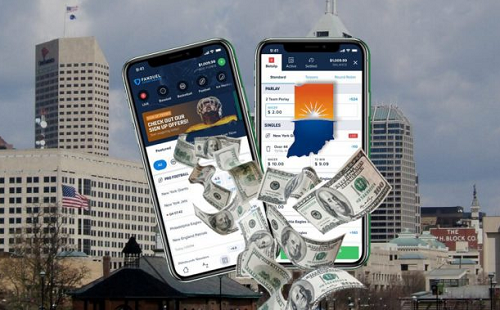 By October the figure was at 91.7 million dollars which is almost triple what was made in September. this unprecedented spike may have been due to the introduction of mobile betting in October. Eventually almost 70% of all wages were coming in via mobile gambling. By December they the monthly betting wages were at almost 162 million dollars.

Indiana sports betting makes a good case for allowing mobile sports betting in other States. Not only are the online sportsbooks making money the state is also getting revenue and taxes from this so everyone seems to be winning. We look forward to reporting more growth for this fledgling sports betting state. Follow up on our blogs for more on this and other us gambling news.