It has only been four months since the sale of the Majestic Star Casino was approved by the Indiana Gaming Commission (IGC) and already the casino is undergoing major changes. Majestic Star Casino will now be Hard Rock Gary. Spectacle Entertainment, the new owners of Majestic announced that through a $400 million partnership with Hard Rock International they would be rebranding. Thanks to the gaming law passed earlier in April, the Hard Rock Gary will be able to use the same licence. Not only that Spectacle is moving their operation from the two boat casinos to inland. There are planned expansions to Hard Rock Gary’s gaming additions. Will Hard Rock Gary include a hotel to their casino as that seems to be the trend with land-based casinos nowadays. 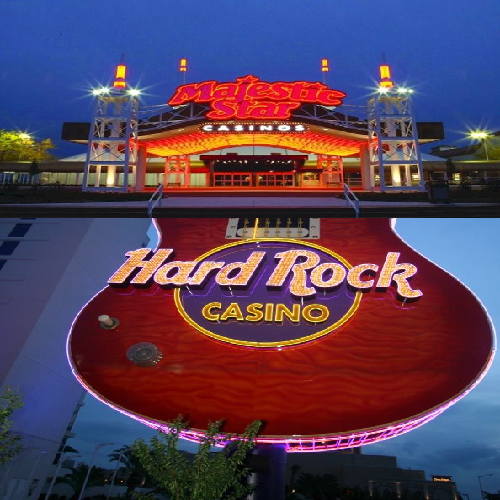 Although there has been no mention of a hotel to be added to the Hard Rock Gary, Spectacle is making big moves at their new venture. Currently, Majestic Star’s casino boats have 1,620 slots machines and 63 table games combined. according to a recent press release the Gary Hard Rock will have around 2,764 gaming stations. This will outdo Indiana’s current largest casino Horseshoe Hammond. The Horseshoe which is six miles west of Gary, has just over 2,100 slots and 150 table games.

Spectacle has not been secretive about its plans to continually expand. They are eyeing the Terre Haute casino. They have made announcements that their expansion is going beyond just Gary. The acquisition and rebrand of Majestic Star to Hard Rock Gary comes barely three months after they are purchasing JACK casino In Cincinnati and Turfway Park racetrack in Kentucky. The casino and racetrack were close to $800 million. The transaction is still pending approval from the relevant regulators in the two towns. Keep following our blog for updates on this and other gambling stories.