4th & Goal will surely be a hit with American football fans. It combines a players love for football with spinning reels. The thrill that comes with the competition makes players want to play more. The slot was released in 2015 and is a five-reel, 15 payline game with a top payout. Players will be in the field with the likes of quarterback Colt and other prominent players. There is no need for slot players to stand on the sidelines because they are also given the opportunity to be a coach. The cheerleader serves as motivation because they award players with 20 free spins.

This visually appealing slot game from Arrow’s Edge allows players to appreciate the stadium surrounded by fans. Bonuses are some of the exciting things that are on offer. The game is crafted for US players who are eager to score goals and win. Also, check out reputable casino sites below. We review slots such as 4th & Goal for our readers so that they know what to expect when playing the various slot games

Arrows Edge developed 4th & Goal for players to enjoy the interesting bonuses. We have listed the rewards that make the game worthwhile below. 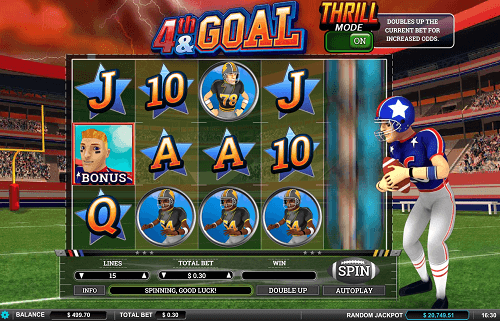 This game will be liked by football fans. So, we suggest that US players give it a chance to experience the bonus features and maybe even win the jackpot. The 4th & Goal is attractively designed with great graphics and animations that complement the game. In addition, the sound effects make the game even more exciting. We give the game four stars out of five because it’s a great slot.